Howard Means was Senior Writer for Washingtonian magazine from 1977-1982 and Senior Editor from 1989-2000. In between, he was Critic at Large and an editorial board member for the Orlando Sentinel and an op-ed columnist for King Features Syndicate. At the Washingtonian, he won three William Allen White Medals for feature writing.

Among his earlier books are the first biography of Colin Powell, a selection of the History Book Club; Money & Power: The History of Business, companion piece to the CNBC documentary of the same name and translated into Chinese, Japanese, and many other languages; a novel, CSA, optioned for an ABC mini-series; The Banana Sculptor, the Purple Lady, and the All-Night Swimmer, studies in eccentricity, co-authored with Susan Sheehan; The Avenger Takes His Place: Andrew Johnson and the 45 Days That Changed the Nation, also a featured selection of the History Book Club; and most recently, Johnny Appleseed: The Man, the Myth, and the American Story, of which Ken Burns wrote “John Chapman comes alive here, and it is a thrilling experience to escape the decades of myth.” Over the last fifteen years, Means has also assisted in the writing of numerous books, including best-selling memoirs by Michael Deaver, Robert Baer, Louis Freeh, and George Tenet. He is now at work on a look back at the Kent State shootings: May 4, 1970.

Born and raised in Lancaster, Pennsylvania, he lives now in Millwood, Virginia, with his wife, Candy.

Choose a stroke and get paddling through the human history of swimming!From man’s first recorded dip into what’s now the driest spot on earth to the splashing, sparkling pool party in your backyard, humans have been getting wet for 10,000 years. And for most of modern history, swimming has caused a ripple that touches us all–the heroes and the ordinary folk; the real and the mythic.

Monday morning, May 4, 1970, found Kent State a place strangely divided against itself: part university, part military installation; a school where students were encouraged to gather in classrooms but prohibited from doing so on the campus Commons. 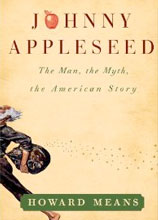 The Man, The Myth, and the
American Story

Published by Simon and Schuster
**Now Available in Paperback**

For the 150th anniversary
of the Sultana tragedy–

From the ashes of a divided nation came the Confederate States of America — and all that remains of the Union as we knew it is a disaster area called the Industrial Zone. The capital is Richmond, and the races are equal but very, very separate. That’s the premise of Howard Means’s fascinating, provocative, sophisticated new thriller.