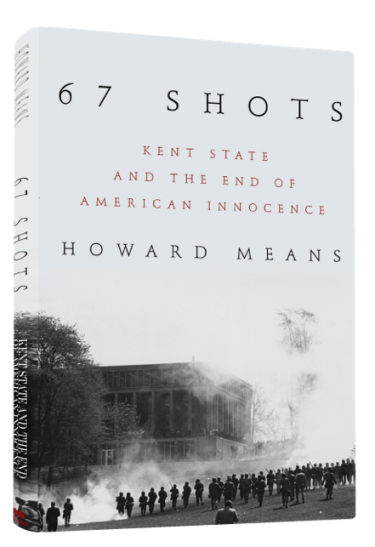 Recent email and other responses to 67 Shots

At the time of the killings I was at UCSB grad school. An exchange student from UK remarked that this was an instance of working class vs. middle class. There was a resentment by those subject to the draft towards those with deferments.

One of the black activists on campus marveled that whites would shoot other whites.

I remember my brother graduating from high school in 1971 and my dad not allowing him to attend Kent because of the shootings.

I was in the Kent State library reading Sartre’s Being and Nothingness, assigned to my English Freshman Honors reading list, when the shootings occurred. I was also taking drawing classes in the building next to the ROTC building (all barracks and all really miserable), but that class ended at 10:45. I heard shouting, screams and smelled tear gas. I closed the book, went back to my off-campus lodging, and then my landlord came home, flipped on the tube, and said, “They all should have been killed.” School was closed by then. Alison Krause and I knew each other as she was also in art/art history. So I went home to Akron, called my parents who were in Dallas on business trips, and they told me to meet them in San Francisco the next day. So I did.

I was a college student at Ohio University during the Kent State shootings and have memories of the National Guard and tear gas first hand!

I remember finding out many years later that when my Dad came down to campus to pick my sister and me up after the campus shut down, he had a gun in the glove compartment.   I had no idea my Dad had even had a gun, and I had no idea that there was any need to be afraid.  After reading your book, I can see that I was not alone in my feeling of not being afraid and that my Dad was not alone in his very real fear of the explosive situation.

This came from a Guardsman who had heard of 67 Shots but not yet read it. I don’t have permission to use his name:

I was one of the green pigs. I don’t know if it is in your book, but another anecdote is the class in the theater at Camp Perry a week after the shooting. A major made a statement that put a hush over the auditorium. He said if we were at Kent State after our shooting-range practice we would have killed forty instead of four. We were all so bummed out and now shocked by his statement. Thanks for writing the book. I plan to read it.

This poem was published on The New Verse News blogspot on June 11, 2016.

AFTER READING 67 SHOTS: THE SHOOTINGS AT KENT STATE

Recalling the all night vigils

“National Guard duty.” he said when asked
why he could play.  “I hope I don’t get
called up. I hope there are no more
student riots like at Kent State.”

He looked at me, then toward
the pitcher toeing the mound
and I knew he would, if someone
in command told him to.
“You’re up.” He said.

Alan Catlin has published numerous chapbooks and full-length books of poetry and prose, the latest of which, from March Street Press, is Alien Nation.