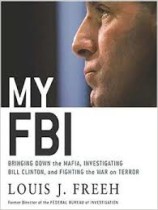 Bringing Down the Mafia, Investigating Bill Clinton, and Fighting the War in Terror

A Collaboration with Louis Freeh

“In one of the year’s more explosive Washington memoirs, Freeh pulls no punches.”—The Atlanta Journal-Constitution

The FBI that Freeh took over in the summer of 1993 was still reeling from the bloody standoff at Ruby Ridge and the conflagration at the Branch Davidian compound in Waco, Texas. Unpopular, underfunded, and understaffed, the Bureau was also creeping along in the technological Dark Ages. For eight years—the second longest tenure of any director since J. Edgar Hoover—Freeh would fight tooth and nail to turn the FBI around.

In My FBI, we follow Freeh through his five-year battle against Clinton, National Security Adviser Sandy Berger, and others to win indictments for the Khobar bombings in 2001, which stated that Iranian government officials played a role in the attack.

No wonder Bill Clinton called Freeh a “law enforcement legend” when he nominated him to be FBI Director. No wonder, either, that when Clinton subsequently called that appointment the worst one he made as president, Freeh considered it “a badge of honor.”